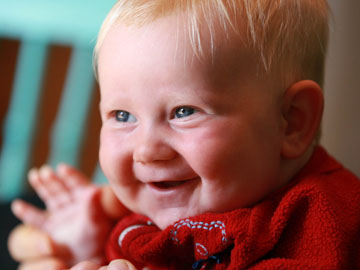 This baby is not alone. This has two older brothers, Jazz and Kio, trapped in their parents’ “crusade against the tyranny of assigned gender roles“. Read this excerpt from the news article (you can read the full article here Parents Keep Child’s Gender Under Wraps):

“We’ve decided not to share Storm’s sex for now–a tribute to freedom and choice in place of limitation, a stand up to what the world could become in Storm’s lifetime (a more progressive place? …),” it said.

That’s right. They’re not saying whether Storm is a boy or a girl.

There’s nothing ambiguous about the baby’s genitals. But as Stocker puts it: “If you really want to get to know someone, you don’t ask what’s between their legs.” So only the parents, their two other children (both boys), a close friend, and the two midwives who helped deliver the now 4-month-old baby know its gender. Even the grandparents have been left in the dark.

“In fact, in not telling the gender of my precious baby, I am saying to the world, ‘Please can you just let Storm discover for him/herself what s (he) wants to be?!.” she wrote in an email.

I have many gay friends. They went through periods of self-realization of who or what they are but they were NEVER consciously groomed to deviate from the norms by their parents. Their conscious decision to act and feel opposite the genitals they were born with went through an emotional, social and psychological process and that process helped define who they are now. People accept them as persons because of their good heart, not because of the sex they were born with or the gender they chose to belong to.

After I read the article, I have no qualms about forwarding my personal opinion regarding the parents. They are two selfish people making self-serving decisions regarding their children. I could use my entire webspace writing about my reasons for calling the parents of these kids, Kathy Witterick and David Stocker, selfish and why I feel pity for the kids, Jazz, Kio and Storm. But I will not be so tactful because of my indignation towards their dysfunctional parenting.

I prefer to re-post a comment on the same article from a man named Bud:

“Being a gay man. I know as much as anyone that our society is in dire need of being taught to be accepting of others without regard to race,color, sex etc. However, using your children as a social experiment is not a great idea. Progressive thinking, but just not a great idea. Teach your children to be free thinkers if you want to change the world. But dont use them as lab rats to prove a point. They are human beings and should be treated as such.” The above picture shows Baby Storm with his parents and two older BROTHERS. Jazz has a long braided hair and Kio has blond curls which their parents claim is just the way the boys have chosen for their hairs to be.

This article makes me remember the book “A Child Called IT“. It is about an abused child. tsk… tsk… tsk.

We cannot use the pronouns she, he, him and her to refer to Baby Storm because the parents are fighting against this labelling. So Baby Storm is now a child called IT. Does that make you happy Kathy Witterick and David Stocker?

6 thoughts on “Baby Storm: Neither A Boy Or A Girl Until IT Has the Capacity To Choose Which Gender IT Wants To Be”