Skip to content
— current events, life in the Philippines — 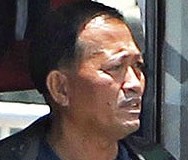 Former Senior Insp. Rolando del Rosario Mendoza was a multi-awarded officer who was cited in 1986 by Jaycees International as one of the 10 outstanding policemen of the Philippines.

In January this year, he was ordered sacked by the Office of the Ombudsman together with four other policemen for allegedly extorting P20,000 from Christian Kalaw, a chef at Mandarin Hotel, who was also said to have been forced to swallow a sachet of “shabu” (methamphetamine hydrochloride).

The officers reportedly accosted Kalaw for illegal parking, driving without a license and use of illegal drugs on April 9, 2008, in Manila.

Administrative charges were brought against Mendoza. He was relieved as chief of the Mobile Patrol Unit and dismissed by the Philippine National Police on Feb. 16, 2009, with all his retirement benefits forfeited.

A recipient of 17 awards and commendations, Mendoza was fired in spite of a recommendation by the PNP Internal Affairs Service and prosecutors that the case against him be thrown out after Kalaw failed to attend proceedings against the officer.

Read more about him here.

He has served his country and his profession well. From my innermost gut, I don’t think he will resort to such an action if he does not feel strongly about the injustice done to him. Yes, the end doesn’t justify the means -the Philippines is taking the brunt of this drama – but if we are to follow this melodrama from its very beginning, we are likely to understand where Senior Inspector Rolando del Rosario Mendoza was coming from. It’s shocking to read this (follow the thread from the original post Crooked Manila Cops Get Served by Viral E-mail):

My freind from la salle told me this story, that this Christian Kalaw is really a drug addict..the time that the incident happen last year the father of Christian wanted him to take a drug test, Christian afraid of his father then admitted that he will be tested positive if the drug examination will be taken.. Christian Kalaws parents could not take the shame from having a drug addict son.it was then that Christian made a story that these cops forced him to swallow shabu..just to cover up his dependense from illegal drug, and to prevent further disgrace of the family they diverted the story to the cops…just to show others that they dont have a drug addict son..

Now, where oh where is Christian Kalaw?

6 thoughts on “The Hostage-Taker”